The phylogeography of a wide-ranging bird in Asia, the common pheasant Phasianus colchicus 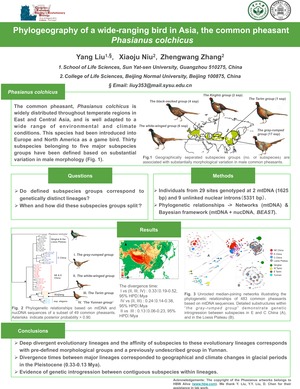 The common pheasant, Phasianus colchicus is distributed throughout temperate regions in East and Central Asia, and had been widely introduced into Europe and North America as a game bird. This species is well adapted to a wide range of environmental and climate conditions. Thirty-one subspecies have been identified based on substantial variation in male morphological ornaments. We investigated the phylogeography and genetic diversity patterns of common pheasant in Asia using mitochondrial and nuclear genes, and male morphological characters. Our analyses revealed five highly divergent evolutionary lineages and the affinity of subspecies to evolutionary lineages corresponds with four pre-defined morphological groups and a previously undescribed group. The distribution of these lineages reflects geographical breaks of mountains, plains and deserts, and the estimates for the divergence times between these lineages probably predate the last glacial maximum. We further found evidence of extensive genetic introgression between contiguous subspecies within lineages. Taken together, these results suggest that the phylogeographic patterns of common pheasant had been shaped by ancient colonization events and population expansions during postglacial periods. We are currently investigating genome-wide variation related to adaptation and radiation of common pheasant using a RAD-sequencing approach. Furthermore, our study system provides a favorable framework to study the speciation processes under biogeography, local adaptation and sex selection.