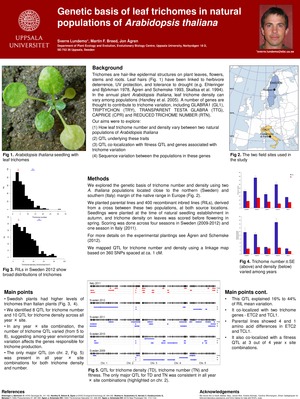 Trichomes are hair-like epidermal structures on plant surfaces that may contribute to herbivore deterrence, UV protection, and tolerance to drought. In the annual plant Arabidopsis thaliana, leaf trichome density varies considerably among populations. We examined the genetic basis of differences in trichome density between two populations located close to the northern (Sweden) and southern (Italy) margin of the native range. We planted parental lines and 400 recombinant inbred lines (RILs) derived from a cross between the two populations at the sites of both source populations. Seedlings were planted at the time of natural seedling establishment in the autumn, and trichome density was scored on leaves before flowering in spring. We mapped QTL for trichome density using a linkage map based on 360 SNPs spaced at ca. 1 cM intervals. We asked how many QTL contribute to differences in trichome density and what is the magnitude of their effects? Do QTL for trichome density co-locate with candidate genes known to influence trichome density? Can QTL effects be linked to mutations in these genes? Preliminary analyses detected 11 QTL influencing trichome density. Of these, one QTL on chromosome 2 was consistently detected across years and at both study sites, and explained between 19% and 44% of the variation in RIL means. This QTL was located in a genomic region harbouring two genes known to influence trichome density: ETC2 and TCL1. Sequence differences between the two parental lines in these two candidate genes corresponded to four and one amino acid, respectively. We will present an analysis of the functional significance of the sequence differences detected and of their geographic distribution. In ongoing work, we explore the adaptive significance of trichome density by connecting variation in trichome density to variation in other putatively adaptive traits and to fitness in the field.