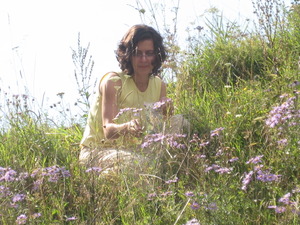 Evolutionary changes in the sexual reproductive system: the case study of the invasive tristylous Oxalis pes-caprae

The establishment and spread of invasive species depends on different evolutionary and ecological pressures, with reproduction being a key factor for success. Among other strategies, vegetative propagation has been correlated with invasion potential. Because clonality affects the spatial distribution of genets and its flowers, clonal species are expected to have increased rates of self-pollination. However, selfing might be advantageous as it enables to overcome the lack of compatible mates or scarcity of pollinators during invasion. Under this scenario, in self-incompatible species, selection may favor the breakdown of the incompatibility system, as plants with some levels of compatibility would have advantage in low density conditions and be able to establish new populations after dispersal (Baker’s law). Oxalis pes-caprae is a tristylous species with heteromorphic incompatibility; in most invaded areas, strong founder events lead to the introduction of the 5x short-styled morph only, leading to an exclusively asexual mode of reproduction. Yet, recent studies have shown scattered sexual reproduction and the emergence of new floral morphs in the western Mediterranean basin. Our objective was to evaluate the rates of self- and morph-incompatibility across this invaded area, and compare it with the native range, in order to assess changes in the reproductive system. Controlled hand-pollinations were made in invasive and native populations and plant reproductive success was quantified. The incompatibility system varied among invasive populations and floral morphs; overall a breakdown in several populations across the invaded range was observed, mostly through a partial breakdown in morph-incompatibility of S-morph, but also in self-incompatibility system of M- and L-morphs. Because reproductive strategies determine the demography and genetics of invasive populations, the results obtained are important to understand the evolutionary dynamics operating during invasion. 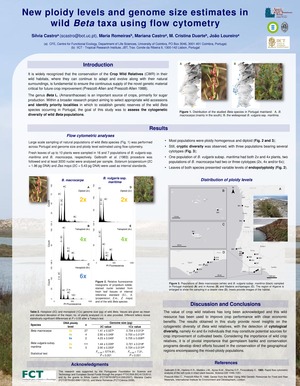 It is widely recognized that the conservation of the Crop Wild Relatives (CWR) in their wild habitats, where they can continue to adapt and evolve along with their natural surroundings, is fundamental to ensure the continuous supply of the novel genetic material critical for future crop improvement. The genus Beta L. (Amaranthaceae) is an important source of crops, primarily for sugar production. Within a broader research project aiming to select appropriate wild accessions and identify priority localities in which to establish genetic reserves of the wild Beta species occurring in Portugal, the aim of this study was to assess the cytogenetic diversity of wild Beta populations. For this, a large scale sampling of natural populations of B. vulgaris subsp. maritima and B. macrocarpa was performed across Portugal (including also the archipelagos of the Azores and Madeira) and genome size and ploidy level estimated using flow cytometry. The analysed populations were mostly diploid, except for one population of B. vulgaris subsp. maritima that presented both diploid and tetraploid individuals, and for two populations of B. macrocarpa where two or three cytotypes (diploids, tetraploids and/or hexaploids) were found. Leaves of both species presented variable levels of endopolyploidy. The obtained results will be discussed within the context of interspecific hybridization and cryptic diversity, and constitute significant data for the conservation of these wild Beta crop relatives.

Do native and invasive populations of Oxalis pes-caprae differ in reproductive traits?

Biological invasions offer the opportunity to study evolutionary transitions in current timescales. Because reproductive strategies determine demographic and genetic characters of invasive populations, variations on reproductive characters have the potential to influence evolutionary processes during invasion, and the invasion process itself. Thus, comparative studies of reproductive systems between native and invaded ranges are crucial for understanding the mechanisms of plant invasion and for predicting microevolutionary changes in anthropogenic environments. Oxalis pes-caprae is a tristylous species native from South Africa and an invasive weed in Mediterranean climate regions worldwide. In its native habitat, the species presents three floral morphs, reproduces sexually and asexually, and has different cytotypes (2x, 4x, 5x). In most invaded areas, strong founder events lead to the introduction of the 5x short-styled morph only, leading to an exclusively asexual mode of reproduction. However, in the Mediterranean basin, new floral morphs and cytotypes with the ability to reproduce sexually were recently found. The aim of the present study was to assess evolutionary shifts in asexual and sexual reproduction traits between floral morphs and cytotypes, and between native and invasive populations of O. pes-caprae. For this, phenotypic characters directly linked with reproduction were assessed in plants from native and invasive populations growing in a common garden. The results of the sexual and asexual reproductive traits among floral morphs, cytotypes and invaded vs. native range are presented. The information gathered adds significant background information on the evolutionary biology and ecology of biological invasions. The knowledge of the probability and speed at which local adaptation evolves in invasive plants is particularly important for management practices, especially when evolutionary changes enhance ecological opportunities and invasive spread.

Hybridization can create natural hybrid zones where two related species mate and produce (some) viable hybrids. These areas are natural laboratories to investigate evolutionary processes and mechanisms operating in the organisms integrating them, especially gene flow and selective pressures on phenotypic traits. For example, hybrid zones often present a striking profusion of flower morphologies and floral traits may profoundly influence both formation and fitness of hybrids primarily through the effect on pollinator behaviour. Within the Circum-Mediterranean genus Anacyclus, the rayed-head species A. clavatus co-exists with the rayless-head A. valentinus along the Western Mediterranean coast. In these mixed populations, a high phenotypic diversity in the number and size of ray florets has been observed revealing the existence of a dynamic hybrid zone. The presence of rays has been shown to have significant consequences on pollination, primarily enhancing the attractiveness of heads and consequently influencing the levels of outcrossing. These species show a generalist pollination syndrome since they are commonly visited by more than 80 species of insects. However, the role of pollinator preferences in hybrid zones between highly generalist species remains unknown and its study might help understanding how generalist interactions exert selection of floral phenotypes. Hence, this hybrid zone provides an exceptional microevolutive framework to explore how generalist pollinators are driving the evolution of floral phenotypes. To explore the role of pollinator preferences on floral traits we investigated floral trait variation on a natural hybrid zone of A. clavatus and A. valentinus and assessed the number and type of pollinator visits on each phenotype. Furthermore, we performed phenotypic manipulations of floral morphologies for a better understanding of pollinator preferences

The evolution of sexual segregation within inflorescences: the role of resource competition by flowers

Spatial segregation of sexual functions within inflorescences has been explained as a mechanism of avoiding self-fertilization reducing the negative effects of inbreeding. However, many species with sexual functions separated in different flowers also have self-incompatibility systems making difficult generalizations of this hypothesis. An alternative hypothesis for this pattern is that flowers within inflorescences compete by resources, and that the sequential development of flowers and architectural constraints lead to a gradient on resource availability. For instance, fruit size also follows a positional pattern within inflorescences supporting this resource gradient. This variation on resource availability produces distinct optima for sex allocation accordingly with the position of the flower within an inflorescence, potentially driving the evolution of sexual specialization on separated flowers. Using as a model the largest family of flowering plants, Asteraceae, we explored whether floral specialization in sex functions (either male or female unisexual flowers) within inflorescences was related with higher levels of floral aggregation and therefore with higher resource competition between different flowers within the inflorescence. We measured number of flowers and capitulum size to estimate flower density in 101 species with different levels of sexual specialization: hermaphroditic (only bisexual flowers), gynomonoecious (bisexual and female flowers) and monoecious species (female and male flowers), using herbarium specimens from Swedish Natural History Museum and Coimbra University Herbarium. Statistical differences were assessed with phylogenetic generalized least squared models. Flower number and flower density at inflorescence level was correlated with the specialization degree on floral gender, suggesting that the increase of floral competition might favor sex specialization of male and female functions on different flowers within inflorescences.