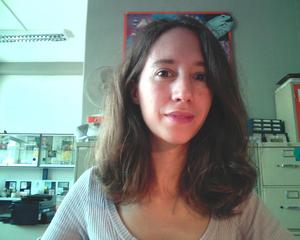 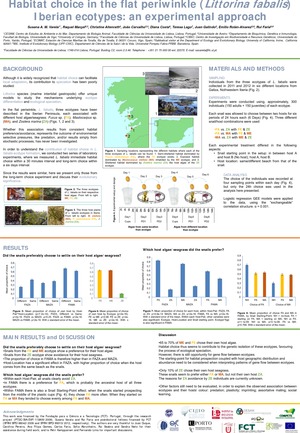 Although it is widely recognized that habitat choice can facilitate local adaptation, its contribution to speciation has been poorly studied. Littorina species (marine gastropods) offer unique models to study the mechanisms underlying ecotype differentiation. In the flat periwinkle L. fabalis, three ecotypes have been described in the Iberian Peninsula, each associated with different host algae/seagrass (Fucus sp., Mastocarpus sp., and Zostera marina). Whether this association results from consistent habitat preference/avoidance, represents the outcome of environmental selective pressures like predation and/or results simply from stochastic processes, has never been investigated. Here we conducted two series of laboratory experiments where we measured L. fabalis immediate habitat choice within a 30 minutes interval and long-term choice within a six days interval. Results were similar: while two of the ecotypes (living in Fucus sp. and Mastocarpus sp.) tend to choose their host algae more frequently than by chance, the opposite trend was observed for the third ecotype (living in Zostera marina). The implications of these results will be discussed within the context of ecological speciation.

Why do spider mites re-mate?

In Tetranychus urticae, only the first mating is effective, except if the interval between first and second copulations is shorter than 24 hours or if the first mating is interrupted. However, males often attempt to copulate with mated females. Here, we address this paradox. We first tested whether males prefer to mate with females that have mated within the preceding 24 hours or with those that have mated before that period. We found that males show no preference between these two types of females. Moreover, the time to mating was longer and the mating duration shorter when males mated with mated females, relative to virgins, irrespective of their timing of mating. This confirms a lack of distinction between different types of mated females and suggests that males are either less motivated to mate with mated females or that the second mating occurs for a different reason than siring offspring. Subsequently, we investigated the consequences of polyandry for the reproductive fitness of females, depending on the frequency and timing of the mating events. We predicted that if females benefit from polyandry, fecundity and survival of multiply mated females would be higher than those of once mated females. Indeed, multiply mated females have higher fecundity than once mated females, suggesting that females potentially benefit from mating multiply. No difference in survival and sex ratio was found between these females. Our data shows that females benefit from multiple matings, hence this behaviour is probably under female control. This result has implications for our understanding of mating behaviour in spider mites and other organisms.