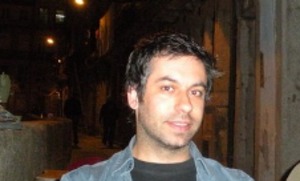 It is well established that ecology plays a critical role in the process of population divergence and ultimately in speciation. Nonetheless, our understanding of how it occurs is still scarce. Characterized by abrupt changes in the environmental conditions over a narrow spatial scale, the marine intertidal is an ideal system to provide valuable insights into the field of ecological speciation. In our study, we focus on North Atlantic populations of the flat periwinkle Littorina fabalis to explore to what extent adaptation and genetic divergence are promoted by contrasting wave exposure intensities and other associated factors. We analysed shell morphology and performed a genomic scan based on AFLP loci to estimate divergence between sheltered and exposed populations of L. fabalis at both micro (<40 Km) and macro-geographic (>1000 Km) scales. With this nested sampling approach, we aim to quantify phenotypic differentiation and to identify loci under disruptive selection among L. fabalis populations subject to different selective pressures in a repetitive manner along the species range. Doing so, we hope to shed light on the genetic mechanisms of ecotype evolution and ecological speciation, ultimately contributing to discern how repeatable (parallel) is divergent evolution in L. fabalis.

The flat periwinkle Littorina fabalis is an intertidal gastropod distributed in the NE Atlantic from Iceland and the White Sea in the North to Portugal in the South. It exhibits several ecotypes along its range and it represents a promising system to explore the mechanisms of ecological divergence as well as of parallel evolution. Nonetheless, prior knowledge of the phylogeographic history of the species is required to address these questions. Previous studies suggest a complex diversification process among Northern European L. fabalis ecotypes, further complicated by the interaction with its sister species L. obtusata. Both species co-occur in most European shores and, while they are well differentiated in terms of ecology, morphology, allozymes and microsatellites, they share substantial mitochondrial variation. With the ultimate goal of understanding to what extent the observed intra and interspecific patterns could result from single or multiple events of adaptation, we perform a comprehensive phylogeographic assessment of L. fabalis and L. obtusata. We cover the whole distribution range, including all L. fabalis ecotypes described so far, and use both mitochondrial and nuclear sequence data to shed light on the demographic history of the flat periwinkles, setting an important baseline to study the above mentioned mechanisms of parallel evolution and ecological speciation.

Although it is widely recognized that habitat choice can facilitate local adaptation, its contribution to speciation has been poorly studied. Littorina species (marine gastropods) offer unique models to study the mechanisms underlying ecotype differentiation. In the flat periwinkle L. fabalis, three ecotypes have been described in the Iberian Peninsula, each associated with different host algae/seagrass (Fucus sp., Mastocarpus sp., and Zostera marina). Whether this association results from consistent habitat preference/avoidance, represents the outcome of environmental selective pressures like predation and/or results simply from stochastic processes, has never been investigated. Here we conducted two series of laboratory experiments where we measured L. fabalis immediate habitat choice within a 30 minutes interval and long-term choice within a six days interval. Results were similar: while two of the ecotypes (living in Fucus sp. and Mastocarpus sp.) tend to choose their host algae more frequently than by chance, the opposite trend was observed for the third ecotype (living in Zostera marina). The implications of these results will be discussed within the context of ecological speciation.