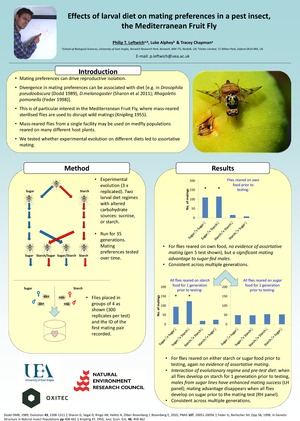 The importance of diet and gut bacteria for host health and fitness is well known across vertebrates and invertebrates. In many instances these associations are variable and flexible, but still of fundamental importance to our understanding of animal biology. In the Mediterranean Fruit Fly (medfly) a pest insect of great agricultural importance, it is known that interactions between diet and gut bacteria can have a significant influence on host development, female fecundity, male mating speed and female survival. There can even be vertical transmission of commensal gut bacteria from mother to offspring, via inoculation into the fruit during oviposition and subsequent ingestion by the developing larval offspring. The composition of microbes is affected by larval and adult diet, which explains why laboratory-reared fruit flies, with a relatively invariant diet, generally seem to have restricted microbial communities in comparison to wild fruit flies. However the precise relationship between diet, gut bacteria and host fitness has not been systematically studied in this pest of economic importance. We address this gap by a study in which we systematically altered larval dietary components and found effects on host development, mating success and gut microbiota. In addition we present data to show that these were trans-generational effects, with non-genetic parental influence on the development of offspring.