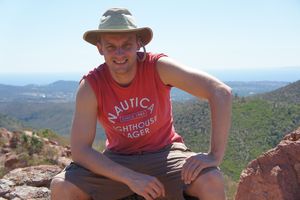 On the fast track to extinction? Origin, divergence and mutation rates of asexual organisms 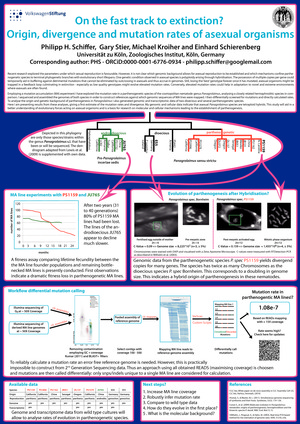 Recent research explored the parameters under which sexual reproduction is favourable. However, it is not clear whish genomic background allows for asexual reproduction to be established and which mechanisms confine parthenogenetic species to terminal phylogenetic branches with evolutionary short lifespans. One genetic condition observed in asexual species is polyploidy arising through hybridisation. The possession of multiple copies per gene could temporarily aid in buffering against detrimental mutations that cannot be eliminated by outcrossing in asexuals and thus accrue in genomes. Still, losing the ‘best’ genotype forever once it has mutated, asexual organisms might be trapped in a feedback loop culminating in extinction - especially as low quality genotypes might evolve elevated mutation rates. Conversely, elevated mutation rates could help in adaptation to novel and extreme environments where asexuals are often found. Employing a mutation accumulation (MA) experiment I have explored the mutation rate in a parthenogenetic species of the cosmopolitan nematode genus Panagrolaimus, analysing a closely related hermaphroditic species in comparison. I sequenced and assembled the genomes of both species in order to construct references against which genomic sequences of MA lines were mapped. I then differentially screened for mutations and directly calculated rates. To analyse the origin and genetic background of parthenogenesis in Panagrolaimus I also generated genomic and transcriptomic data of two dioecious and several parthenogenetic species. Here I am presenting results from these analyses, giving a first estimate of the mutation rates and divergence. My genomic and cellular data indicate that asexual Panagrolaimus species are tetraploid hybrids. This study will aid in a better understanding of evolutionary forces acting on asexual organisms and is a basis for research on molecular and cellular mechanisms leading to the establishment of parthenogenesis.

Major changes in the core developmental pathways of nematodes: Romanomermis culicivorax reveals the derived status of the Caenorhabditis elegans model

Despite its status as a model organism, the development of Caenorhabditis elegans is not necessarily archetypical for nematodes. The phylum Nematoda is divided into the Chromadorea (indcluding C. elegans) and the Enoplea. Compared to C. elegans, enoplean nematodes have very different patterns of cell division and determination in development, while at the same time the adult vermiform phenotype is extremely similar across the phylum. Embryogenesis of the enoplean Romanomermis culicivorax has been studied in great detail, but the genetic circuitry underpinning its development is unknown. We created a draft genome of R. culicivorax and compared its developmental gene content with that of two nematodes, C. elegans and Trichinella spiralis (another enoplean), and a representative arthropod Tribolium castaneum. This genome evidence shows that R. culicivorax retains components of the conserved metazoan developmental toolkit lost in C. elegans. T. spiralis has independently lost even more of the toolkit than has C. elegans. However, the C. elegans toolkit is not simply depauperate, as many genes essential for embryogenesis in C. elegans are unique to this lineage, or have only extremely divergent homologues in R. culicivorax and T. spiralis. These data imply fundamental differences in the genetic programmes for early cell specification, inductive interactions, vulva formation and sex determination. Thus nematodes, despite their apparent morphological conservatism, have evolved major differences in the molecular logic of their development. R. culicivorax serves as a tractable, contrasting model to C. elegans for understanding divergent genomic and thus regulatory backgrounds generating a conserved phenotype. The draft genome will promote use of R. culicivorax as a research model.