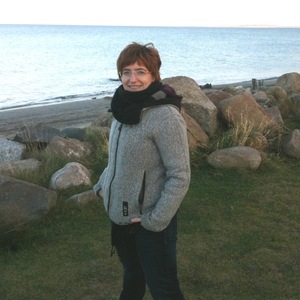 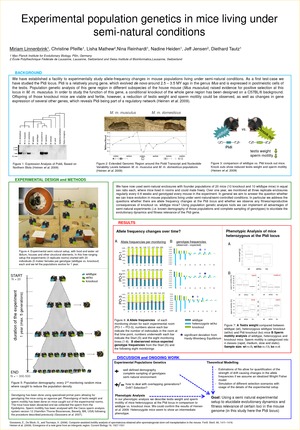 We have established a facility to experimentally study allele-frequency changes in mouse populations living under semi-natural conditions. As a first test-case we have studied the Pldi locus. Pldi is a relatively young gene, which evolved de novo around 2.5 – 3.5 MY ago in the genus Mus and is expressed in postmeiotic cells of the testis. Population genetic analysis of this gene region in different subspecies of the house mouse (Mus musculus) raised evidence for positive selection at this locus in M. m. musculus. In order to study the function of this gene, a conditional knockout of the whole gene region has been designed on a C57BL/6 background. Offspring of those knockout mice are viable and fertile, however, a reduction of testis weight and sperm motility could be observed, as well as changes in gene expression of several other genes, which reveals Pldi being part of a regulatory network (Heinen et al. 2009). We have now used semi-natural enclosures with founder populations of 20 mice (10 knockout and 10 wildtype mice) in equal sex ratio each, where mice lived in rooms and could mate freely. Over one year, we monitored all three replicate enclosures regularly every 6-8 weeks and genotyped every mouse in the experiment. In general we aim to answer the question whether we can trace evolution in mouse populations living under semi-natural/semi-controlled conditions. In particular we address the questions whether there are allele frequency changes at the Pldi locus and whether we observe any fitness/reproductive consequences of knockout vs. wildtype mice? Using population genetic analysis tools we can implement all advantages of semi-natural experiments (i.e. known demography of those populations and complete sampling of genotypes) to elucidate the evolutionary dynamics and fitness relevance of the Pldi gene.