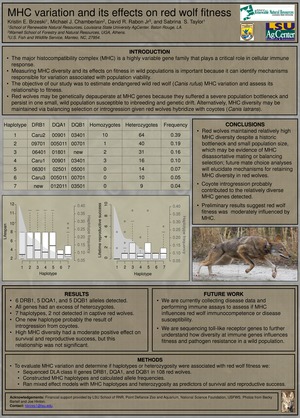 The major histocompatibility complex (MHC) is a highly variable gene family which plays a critical role in cellular immune response. As such, measuring MHC diversity and its effects on fitness in wild populations is important because it may allow us to identify variation associated with population viability. The focus of our study was to estimate endangered wild red wolf (Canis rufus) MHC variation and assess its relationship to fitness. In total, we sequenced 350 wild red wolves at the dog leukocyte antigen class II genes DRB1, DQA1, and DQB. We related MHC variation at these loci to fitness measures including lifetime reproductive success and survivorship, which were obtained through a pedigree consisting of 23 years of detailed life history data. Additionally, we evaluated if particular MHC haplotypes or heterozygosity were associated with incidences of sarcoptic mange (Sarcoptes scabiei). These results will provide insight into how MHC diversity influences fitness and pathogen resistance in a wild population. Future work will be expanded to include Toll-like receptor genes, a family of genes involved in the innate immune system.