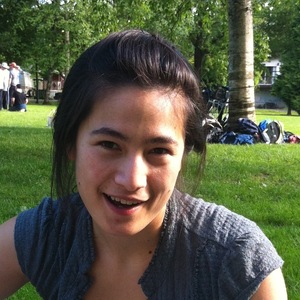 Independently evolving populations may adapt to similar selection pressures via different genetic changes. The interactions between such changes can then inform us about the underlying fitness landscape, allowing us to determine whether gene flow would be facilitated or hampered following secondary contact. We used Saccharomyces cerevisiae to measure the genetic interactions between independently evolved first-step mutations to the fungicide nystatin. We found that genetic interactions are prevalent, even among the first adaptive mutations. In the adaptive environment, the more beneficial mutation often masks the other, less beneficial one. This would allow a population fixed for the less beneficial allele to acquire and fix a more beneficial allele - thus continuing to climb the adaptive peak. In one case, however, reciprocal sign epistasis was observed, indicative of a fitness valley between two peaks. This is surprising given the small number of mutations combined and the relative simplicity of the adaptive environment.