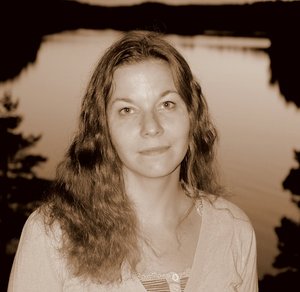 Cooperation and conflict in humans in traditional large joint families 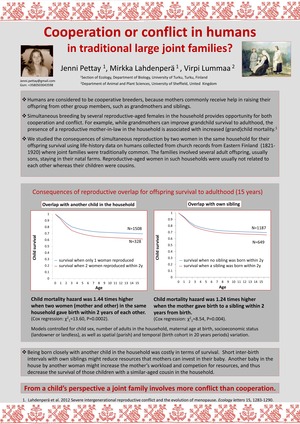 Group living can be associated with cooperation and even cooperative breeding whereby non-reproductive individuals help to raise offspring that are not their own. However, it can also lead to evolutionary conflict, which is a less studied phenomenon. Humans are considered to be cooperative breeders, since mothers commonly gain help in raising offspring from other (usually related) group members, such as grandmothers and siblings. Nevertheless, simultaneous breeding in the same household among reproductive-aged females, such as mothers-in-law and daughters-in-law, has also been linked with reduced success. The importance of cooperation and conflict is likely to vary according to ecology and social structure of populations, leading to differential selection pressures on dispersal patterns. We used life-history data on humans collected from church book records from 19th century Eastern Finland where joint-families were traditionally common. In joint families several adult offspring, usually sons, stayed in their natal farm with their families. This creates a situation where reproductive-aged women are not related to other women in the family, leading to possible conflict over resources and lowered fitness, but cooperation between women is also possible. We analyse mother’s fecundity and survival of her offspring in relation to the presence and reproductive history of other reproductive-aged women in the family by event history analysis, whist controlling for potential confounders such as presence of other family members and temporal variation in mortality and fertility rates. Preliminary analysis suggest that living in larger joint families was beneficial for women’s fitness, both in terms of fecundity and offspring survival, compared to smaller nuclear families. These results suggest that in this population cooperation between family members was more important than conflict, potentially favouring reduced dispersal among adult siblings

Invasive species have negative impacts on ecological communities and they are a major worldwide problem. The North American white-fingered mud crab (Rhithropanopeus harrisii) is aggressive invasive species that has newly colonized also Northern Baltic Sea. Its predation pressure is high towards littoral fauna, e.g. crustacean grazer Idotea balthica. We studied the reported inability of I. baltica to avoid the crab and found that the isopod had strong anti-predator response towards native predatory fish (the European perch Perca fluviatilis) but with lethal outcomes, it did not recognize invasive R. harrisii as predator. The response to invasive and native predators was studied also taking into account the personality variation of isopods, as they have been shown before having behaviour traits fulfilling the criteria of personality. We finally discuss the impacts that invasive predators have on rapid evolution of anti-predator behaviour.

Divergent selection on, but no genetic conflict over, female and male timing and rate of reproduction in a human population

The sexes often have different phenotypic optima for important life-history traits and because they share much of their genome, this can lead to a conflict over trait expression. In mammals, the obligate costs of reproduction are higher for females, making reproductive timing and rate especially liable to conflict between the sexes. While studies from wild vertebrate populations show support for such sexual conflict, it remains unexplored in humans. We used a pedigreed human population from pre-industrial Finland to estimate sexual conflict over age at first and last reproduction, reproductive lifespan and reproductive rate. We found that the phenotypic selection gradients differed between the sexes. For age at first and last reproduction and reproductive lifespan, the relationships with fitness (number of grandchildren) tended to be nonlinear in women, suggesting an intermediate optimum value, while they were linear in men. Both sexes showed a linear decrease in fitness with increasing reproductive rate. We next established significant heritabilities in both sexes for all traits. All traits, except reproductive rate, showed strongly positive intersexual genetic correlations and were strongly genetically correlated with fitness in both sexes. Moreover, the genetic correlations with fitness were almost identical in men and women. For reproductive rate, the intersexual correlation and the correlation with fitness were weaker but again similar between the sexes. These findings illustrate that apparent sexual conflict at the phenotypic level is not necessarily indicative of an underlying genetic conflict and further emphasize the need for incorporating a genetic perspective into studies of human life-history evolution.