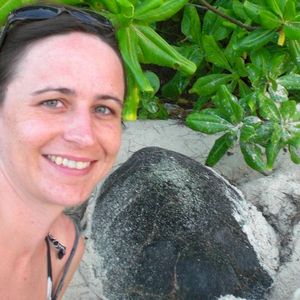 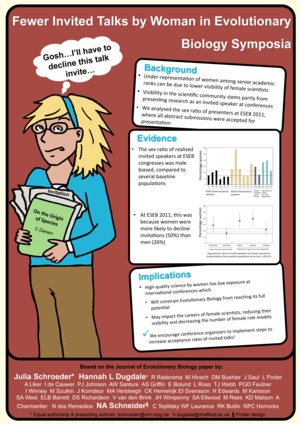 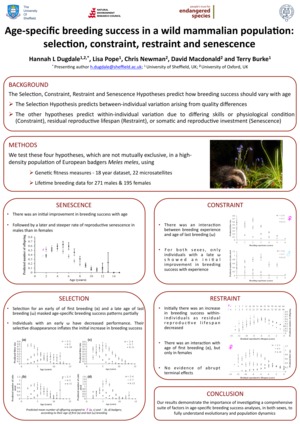 The Selection, Constraint, Restraint, and Senescence Hypotheses predict how breeding success should vary with age. The Selection Hypothesis predicts between-individual variation arising from quality differences; the other hypotheses predict within-individual variation due to differing skills or physiological condition (Constraint), residual reproductive lifespan (Restraint), or somatic and reproductive investment (Senescence). Studies tend to focus on either the initial increase in breeding success or later decrease; however, both require consideration when unravelling the underlying evolutionary processes. Additionally, few studies present genetic fitness measures, and rarely for both sexes. We therefore test these four hypotheses, which are not mutually exclusive, in a high-density population of European badgers Meles meles. Using an 18-year dataset (including 22 microsatellite loci) we show an initial improvement in breeding success with age, followed by a later and steeper rate of reproductive senescence in males than in females. Breeding success was skewed within age-classes indicating the influence of factors other than age-class. This was partly attributable to selective appearance and disappearance of badgers (Selection Hypothesis). Individuals with a late age of last breeding showed a concave down relationship between breeding success and experience (Constraint Hypothesis). There was no evidence of abrupt terminal effects; rather, individuals showed a concave down relationship between breeding success and residual reproductive lifespan (Restraint Hypothesis), with an interaction with age of first breeding only in females. Our results demonstrate the importance of investigating a comprehensive suite of factors in age-specific breeding success analyses, in both sexes, in order to fully understand evolutionary and population dynamics.

The social environment, namely conspecifics, can influence the expression of phenotypes i.e., individuals other than the one expressing the trait in question can explain some of the phenotypic variation. The genetic part of this indirect effect represents an indirect genetic effect (IGE). Not accounting for IGEs can considerably under- or over-estimate the total heritable variation available for selection to act on, and thus predict misleading evolutionary trajectories. Yet, empirical studies on wild populations often ignore IGEs. We present a quantitative genetic analysis of biparental care in a wild, genetically pedigreed, bird population. Sex-specific IGEs increased the total heritable variation. Our data suggests that the female trait could evolve through indirect selection by her mating partner, which most theoretical models explaining the evolution of biparental care do not take into account. Notably, the within-individual repeatability of female parental care was lower than the total heritable variation. Our results show that the assumption that repeatability is the upper limit of heritability should be used cautiously when applying to socially interactive traits, and highlight the importance of accounting for social effects.