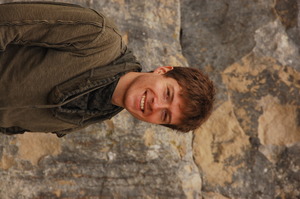 The emergence of drug resistant HIV is a major challenge facing efforts to prevent AIDS and new infections through widespread drug treatment. Much work has focused on the patterns of treatment failure and evolution of drug resistance in infected individuals, but this does not directly correspond to drug resistance evolution in a population. HIV sequences from infected individuals can be used to identify drug resistance mutations, and to reconstruct phylogenetic relationships between viruses, allowing inference of the transmission chain (i.e. the phylogeny). We use HIV pol data from the Swiss HIV Cohort Study to estimate the relative rates of emergence and transmission of drug resistant virus. The inferred phylogeny and drug-resistant status of each individual is fitted to a two-strain birth-death model which quantifies the fitness cost in transmission of drug-resistant strains. Initially the methods have been tested by simulating transmission chains with drug resistance evolution, and then attempting to re-estimate these values. Substantial correlation between the parameters present challenges to their estimation, and indicate that the methods require further development. However, initial results from the data suggest that the basic reproductive number of resistant virus in this cohort is substantially lower than that of the drug sensitive virus. The evolution of virus from sensitive to resistant is a much more common event than reversion to the sensitive type. Drug resistant virus appears to spread too slowly to produce a self-sustaining epidemic, and is instead continually seeded from an ongoing drug sensitive epidemic. However, further refinement of the methods are needed to justify this conclusion. A future key step is to investigate the spread of resistant viruses in high prevalence areas, where drug treatment is increasing, but without the frequency of testing and regime flexibility offered in resource-rich areas.

Mutation and migration: when and where does diversity arise in early SIV infection?

Introduction The rapid evolution of HIV plays a role in disease progression, drug resistance evolution, and hinders vaccine development. The early stage of infection is of particular importance as the virus populates a tenacious reservoir of latently infected cells, preventing clearance of infection. There is evidence for isolation of HIV sequences between different tissue types, but where sequence diversity arises, how fast it spreads and to where, is poorly understood. This is largely because the first weeks of infection are almost unstudied due to the low detectability of virus, and uncertainty as to the timing of natural infections. Methods We explore this early stage in next generation (454) sequencing data from 15 Rhesus macaques experimentally infected with SIV, as a human model for HIV infection. Virus was sampled at multiple time points (7 to 168 days) and tissue compartments (lymph node, rectum, blood cells and plasma). We examine the change in diversity between compartments over time, and where particular mutations arise. By fitting simple and more complex models we estimate the rates of migration between body compartments. Results Diversity generally increases over time, but often falls later in infection, which corresponds to the rise of escape mutations. In agreement with previous analysis of this dataset, escape mutations tend to occur first in the lymph nodes. The migration rate from the gut tissue into the lymph nodes is higher overall than in the other direction. However the migration rates between body compartments are highly variable between animals, which may reflect either stochastic effects or host-based differences in the course of infection. Conclusion Rich data from next generation sequencing provides many opportunities to study spatial evolution in early immunodeficiency virus infection. These data present challenges such as a high error rate, but careful modeling and treatment of the assumptions compensates for such issues.