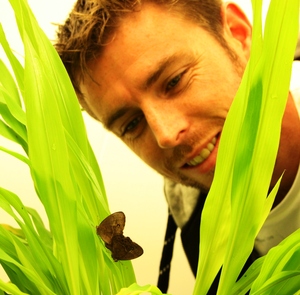 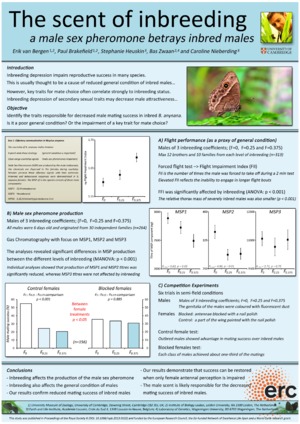 Inbreeding depression results from mating among genetically related individuals and impairs reproductive success. The decrease in male mating success is usually attributed to an impact on multiple fitness-related traits that reduce the general condition of inbred males. However, the reduced mating success of inbred males could also be a consequence of strong selection on females to avoid mating with an inbred male. This is especially relevant if females gain direct benefits through appropriate mate choice (parental care, territory defences, nuptial gifts) or if they suffer direct costs should they mate with an inbred male (decreased offspring viability and fertility). Here we find that the production of the male sex pheromone is reduced significantly by inbreeding in the butterfly Bicyclus anynana. Other traits indicative of the general condition, including flight performance, are also negatively affected in male butterflies by inbreeding. Yet we unambiguously show that only the production of male pheromones affects mating success. Thus, this pheromone signal informs females about the inbreeding status of their mating partners. We also identify the specific chemical component, hexadecanal, likely responsible for the decrease in male mating success. Our results advocate giving increased attention to olfactory communication as a major causal factor of mate-choice decisions and sexual selection.

Mycalesine butterflies have radiated dramatically in Africa, Madagascar and Asia to produce more than 250 extant species. The primary driving process of these radiations could have been the ability of mycalesine butterflies to invade the empty niches that arose as a result of the evolution of the C4 photosynthetic pathway and the world-wide expansion of C4 grasses in open, sunlit environments. Primary forest species of mycalesines are expected to be C3 specialists as the advantage of the C4 pathway declines in shaded forest understories where cool conditions improve the relative photosynthetic efficiency of C3 grass species. C4 grasses are characteristic of more open, sunlit habitats and where we expect mycalesines to be more opportunistic and generalist in their host plant choice or even to have become C4 specialists. Reliable host plant data is essential to be able to test this hypothesis but host plant records for grass-feeding mycalesines are very limited. However, over the last three decades stable isotope analyses have become an important part of the ecologist’s toolbox. We used a community of three sympatric species of Bicyclus in Malawi, which were caught on a daily basis through two wet-dry seasonal cycles between January 1996 and December 1997, to explore whether δ13C the δ18O can be used to detect micro-climate conditions during the larval development of Mycalesine butterflies. Preliminary data shows that the feeding history of the larvae, with respect to C3 and C4 grasses, can be traced by analysing the relative amount of 13C in the leg tissue of adults. Indeed, both savannah species primarily develop on C4 grasses whereas the forest species mainly uses C3 grasses. Increased evaporation of water in the insect is reflected by enriched d18O values in adult tissue. Our data clearly show that the d18O values in butterfly leg tissue are enriched during the dry season. There are interspecific differences that can be explained by adult habitat preferences.