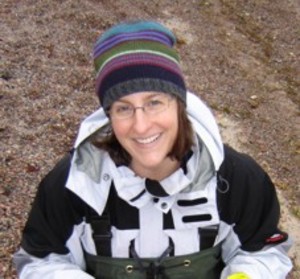 Population genetic structure in marine organisms frequently defies clear explanation and is described as chaotic genetic patchiness. In these cases, patterns of genetic structure may be determined by barriers to dispersal that are difficult to observe, e.g., those created by variable oceanic currents or by the behavior of dispersive larvae and adults. We examined population genetic structure using seven microsatellite loci in the polychaete worm, Pygospio elegans, sampled from 16 sites in a heterogeneous estuarine landscape in Denmark. Most samples showed significant pairwise Fst and Jost’s D, and there was no indication of isolation by distance. Using GESTE, we calculated sample-specific Fst values, which characterize how the samples differ from the metapopulation as a whole. Variation in these estimates was not explained by environmental variables, including salinity, substrate, and distance from the mouth of the estuary. The samples most dissimilar in terms of observed allele frequencies, and those with high estimated numbers of siblings, had larger sample-specific Fst. We hypothesize that polymorphism in the developmental mode of P. elegans, which produces both dispersive planktonic larvae and non-dispersive larvae brooded by the mother, contributes to chaotic genetic patchiness in this estuarine landscape. The large numbers of siblings estimated within samples could reflect high local recruitment of brooded larvae, despite effective dispersal and high gene flow via planktonic larvae.

Many marine invertebrates have complex life cycles in which in one or more larval stages precede the adult stage. The larval developmental mode of a species can affect population dynamics through differences in fecundity, larval mortality and dispersal potential. Developmental mode may also affect temporal stability of populations. Due to multiple risks that planktonic larvae face during the pelagic stage, benthic species with planktonic larvae may be more vulnerable to temporal variation in population genetic structure, whereas species with benthic or non-dispersive larvae are expected to be temporally more stable. We examined temporal genetic patterns in populations of a poecilogonous polychaete with within-species variation in developmental mode. Pygospio elegans can produce small free swimming larvae feeding in the plankton, or benthic larvae feeding on nurse eggs while brooded in capsules in the maternal tube. With our microsatellite analyses, we found low but significant temporal genetic differentiation in the populations with high frequency of benthic larvae. This pattern is likely to have been caused by genetic drift, since estimations of population density, Ne and migration rates among these populations were low. Stable temporal genetic structure and higher Ne was observed in the strictly planktonic population. In one population (Dutch mudflat with both larval modes), a distinct genetic turnover was detected among the temporal samples, which could have been caused by habitat change (due to harsh winter) and (re)colonization from neighboring planktonic populations. Over a long time scale, metapopulation dynamic patterns may be likely in P. elegans, especially in planktonic populations in high disturbance intertidal habitats. Because of the observed polymorphism in developmental mode seen in P. elegans, it is a good model species for research on the consequences of life history variation on population genetic patterns.