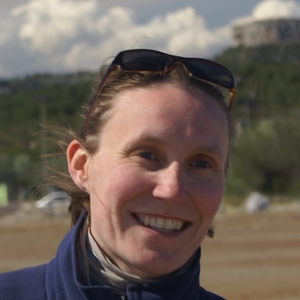 Adaptation to environmental changes is based on the perpetual generation of new phenotypes. We know that phenotypic variability generating mechanisms have not only a genetic but also an epigenetic component, and their relative importance in adaptive evolution is an open question. Variability generating mechanisms are particularly important in host-parasite interaction models in which selective pressures are high and evolution is fast. Epigenetics has been proposed to be the language that is used to communicate between genome and environment. We present here data for a metazoan parasite/host system. The digenetic trematode Schistosoma mansoni is a human parasite that uses the mollusc Biomphalaria glabrata as intermediate host and humans as definitive host. We exposed S. mansoni populations to a stressful but ecological realistic environment: the interaction with an allopatric B. glabrata host in which the parasite develops into the human-infecting cercaria. We then studied phenotypic traits, epigenetic and transcriptional changes that the parasite engages in response to this stressful environment. ChIP-seq studies were performed with antibodies that recognize euchromatic and heterochromatic marks on cercariae released either from the allopatric or sympatric hosts. Differences in chromatin structures were found in roughly 0.1% of the epigenome (excluding repetitive sequences). RNA-seq studies performed on the same stages allowed the identification of about 200 differentially expressed genes between the stressful and normal conditions. Among those we indentified a histone-methyltransferase, providing a potential functional link between stress induced transcriptional and epigenetic modifications. More importantly, our data suggest that chromatin structure changes during the development of the cercariae are inherited by the subsequently formed adult stage.

Sex determination and gonadal differentiation have always aroused a strong interest in evolutionary biology. Sexes appeared independently through all the animal kingdom. For instance, among the 18.000 species of classically hermaphroditic Trematodes, the hundred species of Schistosomatidae are intriguing because they possess separated sexes. In Schistosomes it has been proposed that the apparition of sexes resulted from host pressure when the hermaphroditic ancestors had colonized the warm-blooded hosts having a more sophisticated immune system. Sex of Schistosomes is genetically determined in the zygote at fertilization, but there is no phenotypic dimorphism in all larval stages: sexual dimorphism only appears in adult worms, in the vertebrate definitive host. From a cytogenetic point of view, males are homogametic ZZ and females are heterogametic ZW. The W heterochromosome presents a unique feature: it is devoid of W specific genes but instead, it presents satellite repeat sequences. Moreover, the chromatin structure of these satellite repeat sequences changes through the different stages of parasite life cycle. These elements argue in favor of an original epigenetic mechanisms triggering for sex appearance in Schistosomes. But this does not exclude any possible genetic determinant. These uncommon ZW Trematodes display four putative testis associated genes: Doublesex/mab-3 related (Dmrt) family of transcription factors. In order to connect the apparition of phenotypic sexual dimorphism to molecular mechanisms we have studied the expression on these Dmrt candidates on Schistosomula, the stages where the differentiation appears. Besides, we carried out whole genome approaches: RNA and ChIP (Chromatin ImmunoPrecipitation) sequencing on the same developmental stages. These powerful new technologies and the coming of new epigenetic concepts should offer a new gaze on these important, yet unsolved old evolutionary questions.