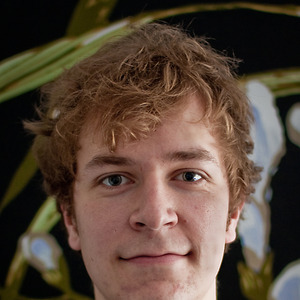 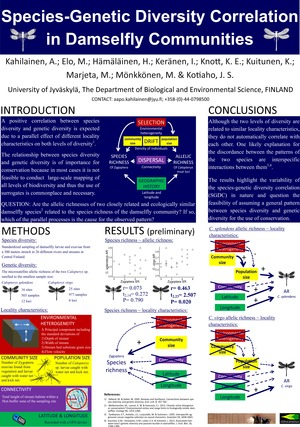 Similarities in the theories of community ecology and population genetics suggest that species diversity and genetic diversity within populations are shaped by the same mechanisms (selection, drift and dispersal). Thus, if the characteristics of the locality (environmental heterogeneity, community size and connectivity) influence these mechanisms in parallel on both levels of biodiversity, a positive species-genetic diversity correlation (SGDC) can be observed. However, also negative SGDCs are possible, if the characteristics of the locality influence the mechanisms such that they act in opposing directions on the two levels. As large scale mapping of genetic diversity is not always feasible, studies on the SGDCs can yield information of whether species diversity patterns could be used in predicting genetic diversities of populations. Also, studies on the simultaneous effect of locality characteristics on species diversity and genetic diversity can help predicting the outcomes of different management and conservation actions on both levels of biodiversity. We studied the relationships between species richness of dragonflies and damselflies, the microsatellite allelic richness of two damselfly species (Calopteryx virgo and C. splendens), and locality characteristics of their stream habitats (environmental heterogeneity, density of individuals, latitude, and connectivity to similar localities). Our analyses revealed a positive correlation between species richness and C. virgo allelic richness with a parallel effect of latitude being a likely explanation for the positive SGDC. However, in C. splendens, no SGDC was observed. The absence of an SGDC was likely due to species richness and allelic richness of C. splendens having relationships of opposing directions with connectivity to similar localities. The differing SGDCs even within closely related species highlight the variability of SGDCs in nature.