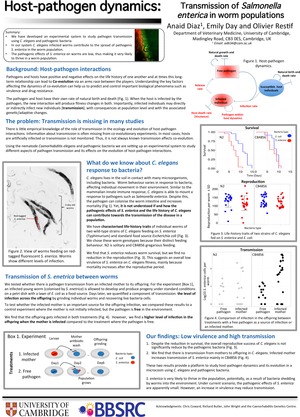 One key aspect of the evolution of virulence is the rate of transmission between susceptible hosts. In theory, a virulent strain may increase in frequency if selection favours its transmission. However, it is not always know what host traits positively select for transmission and how individual variation and population demography affect its evolution. We are working with an experimental system in which specific aspects of infectious disease dynamics can be measured. We use the nematode Caenorhabditis elegans and fluorescent pathogenic bacteria (Salmonella enterica Typhimurium) to tract the spread of infection. In the soil, C. elegans lives in contact with many microorganisms, including pathogenic bacteria. It is known that similar to the mammalian innate immune response, C. elegans is able to mount a response to Salmonella. Despite this, Salmonella can colonise the worm intestine and increases death. Yet, it is not understood if and how the pathogenic effects of Salmonella can contribute the transmission of the disease in a population. We have characterised in detail C. elegans demography in response to the pathogen and varying conditions (i.e. age of infection, worm population size and genetic background). As reported before we found that Salmonella reduces worm survival. However, we found no reduction in the reproduction as a consequence of the pathogen, but a strong negative population density-dependence feedback on C. elegans. As a consequence of the high bacteria shedding of worms and little effects on its reproduction, Salmonella is very likely to thrive in the population